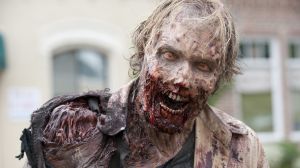 Previously on ILL… I sneezed, I got sick, I imagined how cool it would be if I started a zombie apocalypse…

Of course I was joking about the Patient Zero thing! Yeah? Well, look at me now, all strapped down and hooked up to monitors in a sealed hospital quarantine room, under-going blood tests on the hour, every hour, taken by doctors and nurses in full haz-mat suits, even though I feel fine now! I guess it’s the price you have to pay when people in close contact with you start dying horribly and you appear apparently uneffected and uninfected. Well, just wait until they start coming back as flesh-hungry zombies! Oops!

I’ve warned them about Torquay too, and all the places between there and here. They say that they’re going to look into it. I don’t think they’re taking me very seriously, to be honest. They think it’s a new strain of Spanish flu, or something. They know nada.

Ha! The hospital tannoy just squawked for Security personnel to get down to the morgue A.S.A.P.. Do you think the first batch from the coach have started feeding down there?

I can see the clock on the wall in the corridor through the narrow vertical strip of glass in my door. They’ll be back for more blood in about ten minutes. It might be an idea to try to get out while there’s still someone here with the mental capacity and manual dexterity to key in the pass-code to my room and unbuckle these straps!

They came. Two of them. Even though the fire alarms were creating a cacophonic chorus of chaos (sometimes I can’t resist alliterating!), they still wanted to take my blood again. The nurse punched in the code. She had pretty blue eyes and she was short. The doctor was older, mid-sixties maybe. He had grey eyebrows and bags under his eyes. He was taller. Whether they were both fat or thin was difficult to tell. Haz-mat suits are pretty shapeless and unflattering!

The door opened and that was the last I saw of them. There was a big commotion in the corridor, some screaming was involved, and they ran off, leaving the door swinging.

My earlier question was answered when Tony, from the coach, walked in. He didn’t look too good. His skin was a bit flaky and a touch green, his eyes were pale and vacant, and he had quite a bit of bloody skin and flesh hanging from his gaping mouth. He spotted me lying there, so I said hello and told him how well he was looking. As you do! I was brought up to always be polite.

He shuffled over to the bed, gnashing his goopy teeth and I was convinced that that was that. I was going to be a victim of my own wildly imagined fantasy. I think I screamed. I’m not sure. I hope I didn’t but, deep down, I think I know that I did.

Tony sniffed at me then turned and shambled away and back out into the corridor to join all his new zombie mates. It was a hell of a relief but, on the other hand, I felt strangely offended. I’d always imagined that I would taste nice. Ok, a little fatty, maybe. Tony always ate sensibly.

Now, all I have to do is get out of these damn straps. I should hurry too. I don’t want to miss my own Apocalypse.

This site uses Akismet to reduce spam. Learn how your comment data is processed.